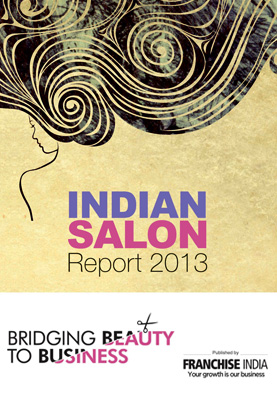 'Indian Salon Report 2013' is a pioneering effort on the part of Franchise India Holdings Limited to bring to the forefront the changing consumption patterns, leading to a paradigm shift in the beauty services landscape, and a decade long journey of the Salon franchise business concept in India. The Indian Salon industry stands at a staggering USD 2 billion mark and is expected to touch USD 3.5 billion by 2015.

Glancing at the high growth pattern, private equity investors are eyeing the salon business and this has proven to be the key funding source for the salon industry's growth. Today India comprises of 25 per cent organised salon market, which will increase its share to 30 per cent by 2015. The backbone of the organised salon industry is an aggressive expansion of franchisees across the nation. The Indian Salon franchise ecosystem today has a support of over 5000 franchisees. Franchise salons will stand to cover 25 per cent of the overall organised industry by 2015 and will grow to be more than USD 1 billion. The report also presents the legal aspect of salon franchise, in which the implications of various laws are majorly discussed.

Overall, the report aims to incorporate trends in the industry as well as bring forward a study of the overall consumption, as these are factors governing growth and change around the business format of the salon industry.