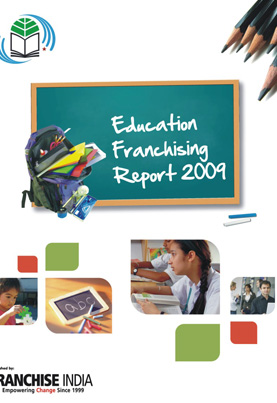 Education sector offers potential business opportunity that emanates from the fact that India has World's largest youth population who wants to boast of receiving quality education with World Class training Systems and also the reality that gap between the number of potentially employable people and corresponding training institutes available to train them is wide.

Part one of Education Franchising Report 2009 gives an overview of the growth of the Indian economy and the consumption. The overview states that Education is the second largest household expenditure after food. Presently in India, not only middle or upper middle class, even poor families spend 20 per cent of their disposable income on private schools and universities; then expose their children to 1.2 million, mostly ill-equipped and under-staffed government school across the country.

Private institutions are typically perceived as hallmarks of quality education and given the demand, Indian education entrepreneur are ready with massive expansion plans, which will provide thrust for the education sector to grow multifold.

Part two of the report discuss about the franchise business in India at large. It claims that franchising sector in India is growing at swift pace of 35 -38 per cent per annum. The market size of franchising sector estimated to be US$ 7.2 billion and is expected to reach US$ 20 billion by 2013. There are around 1200 franchisors in the country, having over 100000 franchisees across country. Out of this number, approximately, 32 per cent are in the Education sector. According to a Franchise India Holding Ltd Education sector is the most franchised sector in India. It is interesting to note that franchise outlets are far higher in number than a company-owned outlet.

Part three of the report gives insights on the education service sector in India both in Formal & Non-Formal education. It states that India is one of the largest markets for education in the world in terms of number of students. Currently, there are over 1.4 million schools in India providing education to over 200 million students. With considerable preference for private schools, the average number of students in a private school stands at a much higher 1,200 versus 146 for a public school. Coaching classes market forms 64% of non-formal Education Industry and the tuitions market in-turn forms 80 per cent of the total coaching class opportunity. Capacity constraints in higher education are the prime cause of outflow of students from the country. Over US$ 13 billion is spent every year by about 450,000 Indian students enrolled in higher education abroad.

Part four states that the franchise growth in the education industry. There are over 390 active education franchisors in India which belong to the class of emerging and established. Informal and Supplementary education has the lion's share of education franchising. Professional and Vocational Skills (Including Aviation, Hospitality, Hotel Management, Finishing school, Jewellery & Gem education, Teachers' Training, Retail training, Financial services and insurance in addition to other industry training centers) is the most franchised of the education category capturing almost 33% of the total share followed by IT training. There are approximately 50,000 franchised education outlets in the country while there are only about 2200 company-outlets operational by education franchisors in all. Business Format Franchising in education industry is most rampant in India. Franchising in Pre-school segment has particularly been a growing phenomenon in the last 6-7 years. Foreign investment through franchise route will be more forthcoming in sectors like child skill enhancement, e-learning, teacher training and finishing schools as also for IT and BPO training.

The Report also gives a thorough account on what all preparedness it takes to start franchising in the education sector and also gives valuable techniques to Business Investors looking to take an education franchise. With more domestic players emerging, the education sector is likely to witness consolidation, but at the same time, increasing foreign participation will drive competition and raise standards.

Part five of the Report gives detailed Case Studies of the India's largest Education Companies whose growth and expansion using the franchise route has been exemplary as they talk about their franchise models as their foundations of success.