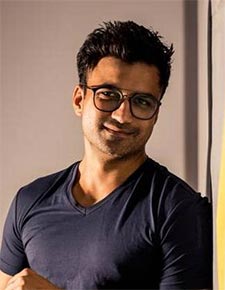 Samrat Reddy is the Founder and Managing Director of the Drunken Monkey smoothie bar chain. Started in Feb 2016, Drunken Monkey was initially a single smoothie bar in Hyderabad. Today the company boasts of more than 60 stores across the country and they're still growing! Samrat Reddy can be best described as someone who is continuously looking for novelty, speed and competition.

After acquiring an Engineering Degree, he worked in Australia for a while before heading off to Scotland to do an MBA. It was in Scotland that he actually thought of setting up a smoothie business. What inspired him? Well, Starbucks of course. He wanted to do to smoothies what Starbucks did to coffee! However, his smoothie empire did not start there. From there, he went on to be involved in a variety of businesses. In 2008, he set up, „Hestia Studios,‟ a 3D animation and visualisation firm, which at that time was way ahead of what was happening in India in terms of design and visual representation. He has also managed a family owned Steel Plant, „Delta PEB,‟ for over 4 years, then he was a part of an Oil Drilling Company in the US, also a Water Treatment Plant in Cameroon!

A self-confessed adventure addict, Samrat has always been first in line to get things going, whether it is work or play. In fact, for him there is no difference between work and play! He takes his job just as seriously as he takes his sport. The Drunken Monkey Commander-in Chief heads a cricket team that has pretty savage reputation in the Hyderabad Corporate circle! He believes that team sports are a great way to build strong work ethics and teamspirit.

In 2015, almost 7 years after he first thought of a smoothie empire, he decided it was time to make it happen. After a year and a half of R&D, planning and refining, the “Drunken Monkey” was born. What’s behind the name? He wanted a wacky, out of the box brand name to stand out from the crowd and inspire curiosity. That and a vision to inspire people to feel beautiful, young and full of energy by adopting a Naturally High way of life is what kick started the country’s largest smoothie chain in the making